Motor Racing Legends 50s sports car and historic touring car competitors will conclude their 2018 season with a two-hour race a piece at the Algarve Classic Festival this weekend.

The autumn pilgrimage to the Autodromo Internacional do Algarve looks set to be a huge amount of fun and excitement in the sunshine. With free practice and qualifying sessions all on the Friday, the 2-hour race for the Historic Touring Car Challenge taking in the Tony Dron Trophy is set for 9:25am on Saturday morning. With the 50s Sports Cars 2-hour race starting at 18:15pm Saturday evening.

This year’s season closing 50s sports car race, takes entries from both the Stirling Moss Trophy and Woodcote Trophy and has a fabulous 27-car grid. In last year’s race Chris Ward took the top step of the podium in a Lister Costin, but it was the Tojeiro Jaguar of James Cottingham and Andrew Smith who led for much of the way before suffering a momentary fuel supply blip in the closing laps dropping them to third. The shiny Lola Mk1 of Keith Ahlers and Billy Bellinger also slipped through to pick up second.

This year Chris Ward is back, but piloting a Lister Knobbly and James Cottingham is back with the Tojeiro Jaguar this time co-driving with Max Girado. Strong competition will come from good consistent lap times and reliability. The Lister Costin of Gary Pearson and Carlos Monteverde have finished on the podium here a number of times, and the Cooper Monaco of Justin Maeers and Charlie Martin could also be a strong podium contender.

Within the Woodcote Trophy competitors Fred Wakeman and Patrick Blakeney-Edwards have won this race for the last two years in their Cooper T38. But strong competition is likely to come from John Ure and Nick Wigley in their Cooper Bristol  T24/T25, and also the HWM Sports Racer of Martin Hunt, driving with Andrew Hall, which has been on good form throughout the season. Just one Jaguar D-Type joins the party this year at the hands of Steve Brooks co-driving with Andrew Smith. The grid is boosted by a number of fabulous sports cars with all the favourite classic marques represented: Maserati, Austin-Healey, Aston Martin, Frazer Nash, Jaguar and even an OSCA. 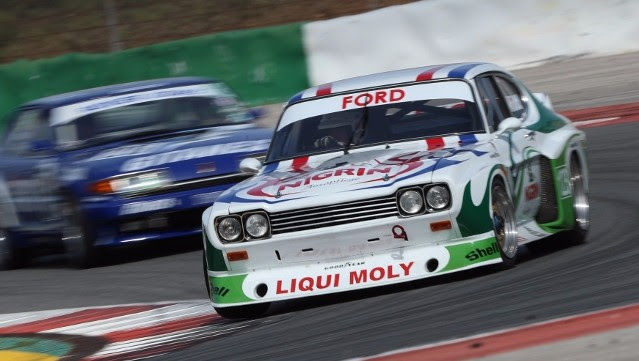 Last year’s inaugural 2-hour Historic Touring Car Challenge was a fabulous battle between the Ford Capri of Ric Wood, BMW of Eric Mestdagh and the Soper –Ward Rover Bastos Vitesse. This year Ric Wood is back driving with BTCC prodriver Adam Morgan and serious competition is likely to come from the Rover SD1 of Patrick Blakeney-Edwards and Fred Wakeman or the Ford Escort MK2 Zakspeed of Malcolm Harding.

In the Tony Dron Trophy classes, expect to see the Ford Capris of Patrick Watts and Malcolm Harrison mixing it with the front-runners and since reliability is key to success in this race there may be a few surprises – we could see the VW Golf GTi of Jim Morris and Tom Shephard finishing on the podium.