Start typing and press
Enter to search
Follow
Skip to content
Motor Racing Legends competitors successfully opened their season last weekend at the Donington Historic Festival. The grids stood out from the crowd, bursting with an array of stunning classic racing cars coupled with exciting and close competitive racing.

In the Mad Jack Pre-War Sports Cars race, Patrick Blakeney-Edwards and Fred Wakeman qualified on pole in their Frazer Nash Supersports with Sam Stretton in his Alta Sports in 2nd.  In Saturday’s early race the Blakeney-Edwards/Wakeman duo had the race pretty much sewn up from lights to flag. In the early stages Fred Wakeman enjoyed a great battle with Sam Stretton in the Alta Sports before Sam retired due to a misfire on lap 9. The 3/4½ Bentley of Clive and James Morley finished 2nd, with the 3/4½ Bentley of Richard Hudson and Stuart Morley 3rd, a great result after they lost an oil pipe in qualifying and nearly didn’t make the grid. Lukas Halusa’s Type 35C Bugattii sadly lost out to a podium in the closing laps of the race suffering clutch issues but finished in 5th place.

Steve Soper & Chris Ward topped the qualifying of the Historic Touring Car Challenge in the JD Classics Rover Bastos Vitesse with Nick/Harry Whale 2nd in the BMW M3 E30. Saturday’s race was as action packed with Chris Ward/Steve Soper romping home with a clean win 36 secs ahead of the field. Behind David Tomlin (Ford RS1800) and Dominik Roschmann (BMW3.0 CSL) entertained the crowds as they swapped places at least 4 times in the closing laps, before David Tomlin made the final move to finish second ahead of Dominik in third. Oliver and Grahame Bryant were overall winners of the Tony Dron Trophy  in their Chevrolet Camaro Z28. The Ford Capris of John Spiers/Neil Merry were 2nd and Martin Greaves and Francis Galashan in 3rd on the car’s debut. 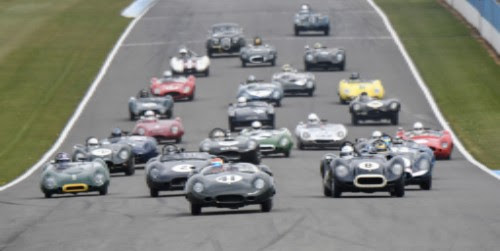 The Stirling Moss Trophy was just as nail-biting to watch especially after Jack Bellinger span at Redgate splitting up the pack, thankfully everybody was able to avoid the spinning paint-free Lotus. It was Chris Ward who finished as the overall race winner in the JD Classics Lister Costin, but he had been chased hard by Will Nuthall in the ‘Woods’ Lister Knobbly. Barry Wood stepped aside to let Will drive solo and ‘have a go’ at the win, costing them a penalty for changing the driver line-up. But the team could afford the penalty as Will had enough in the bank over the third placed car of Charlie Martin and Justin Maeers, and when the Lister Knobbly failed to finish, Nuthall even had enough of a lead to maintain his second place despite not making the podium presentation. 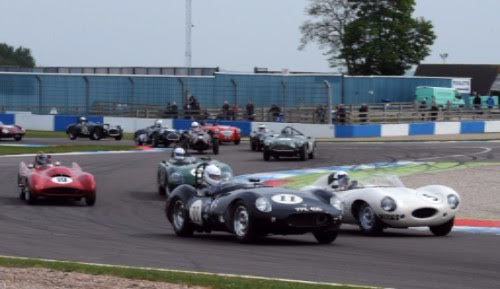 An unfortunate incident unravelled in Saturday’s qualifying of the Royal Automobile Club Woodcote Trophy qualifying, where an oil spill sent cars spinning in all directions at the end of the Dunlop straight. The main casualty sadly was the JD Classics Cooper-Jaguar T33 which had to be recovered. Thankfully Chris Ward was fine, but with JD Classics out of the race it left Patrick Blakeney-Edwards and Fred Wakeman on pole and with a clear path to victory in their Cooper T38. Behind them the Jaguar D-Type of Carlos Monteverde & Gary Pearson looked to offer a serious challenge, but the Jaguar D-Type sadly retired on lap 16. Til Bechtolschiemer was pedalling hard in the Allard J2 to move up to 2nd in the latter part of the race but failing brakes saw him fall back towards the end, leaving Wolfgang Friedrichs & Simon Hadfield to pick up 2nd in the stunning Aston Martin DB3S closely followed by John Ure and Nick Wigley in their Cooper Bristol T24/25.

The Brands Hatch Festival is approaching fast for our 50s grids and HTCC competitors and whilst grids are already looking strong, there is still time to enter this event please get in touch with Lindsey as soon as possible to avoid disappointment.